Stacey has been studying Karate for just over 20 years. Originally starting at age 8; she initially trained for two years and reached her third belt. Leaving training for two years, Stacey returned at age 12 and has been training regularly since then.She has travelled to various European countries over the years, training with top instructors and competing in national, European and World championships. In 2009, she passed her 2nd dan black under Sensei kato 9th dan belt exam at a course in the Ireland honbu dojo in Fermoy and she hopes to attempt her 3rd dan exam in the next couple of years. Her favourite Karate memory is training with the late Asai Sensei, 10th Dan, on Clonea beach, Dungarvan in 1999 during the world championships and accompanying training camp.

Ben began training in Tuam Karate Club with former chief instructor Celine King at age 8. Originally brought to Karate by parents who were anxious for him to learn self defence and to improve his confidence and strength, he has trained continuously since then and feels he owes a huge debt to Karate for the enormous benefits its has given him. Over the years, he has travelled to both Japan and China for training as well as to many European countries. An avid reader (particularly of Karate books!), he tries to read at least one book a week. He cites Karate as being one of the things he loves most of all in life, and just wants to train and learn as much as possible. He dislikes politics and power struggles in the martial arts and those who dupe an unaware public by teaching them substandard “Karate” and self defence techniques as a deceitful way to make money fast. He is also very interested in political theory and moral philosophy, as well as Hardcore punk! He tries to live by the following line from Funakoshi Sensei’s book Karate-Do Nyumon: “When I train with others, I try to learn from them all that I can, I note their good points and try to adopt them, their bad points and try to avoid them”: an open mind is key to personal development. Ben passed his second dan in March 2011 under Kato Sensei.

[*Sempai is a Japanese title meaning “senior”. It is the opposite of “Kohai”, or junior.]

Ian (brother of Ben), also started Karate at a very young age. He has continued to train for the last 13 years since he began and is currently a student of computers and business in college. He enjoys old school Hong Kong martial arts films such as “Snake in the Eagle’s Shadow” and “Drunken Master” and is a huge fan of Akira Toriyama’s famous Martial Arts Manga comic series “Dragonball”. He has a keen interest in the grappling and throwing side of Karate (respectively known as tegumi and nage waza) and hopes to develop this over coming years. His favourite fighters are Genki Sudo and Lyoto Machida. Outside of Karate, he is also a keen amateur musician, playing in local Punk band “Forced Under”. He passed his black belt exam in 2010 under Kato Sensei at the spring technical seminar in the Ireland honbu dojo in Fermoy, being told without warning in the middle of class that he would be grading once it finished! He excelled throughout the gruelling exam, fighting seven opponents one after another and managing to successfully kick a 6’ 4’’ black belt in the head!Ben & Ian as beginners! In the scout hall, June 1999.
Posted by Stacey at 3:24 PM 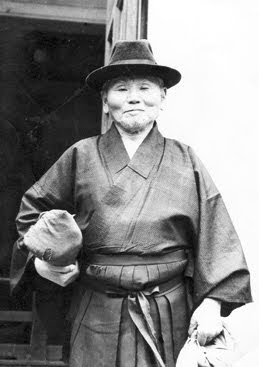 Gichin Funakoshi was born in Shuri, Okinawa in 1868. As a boy, he was sickly and weak, so his parents decided he should learn Karate in order to remedy this. He was primarily trained by two famous masters of his time, Azato Sensei and Itosu Sensei, who also sent him to learn specific skills and techniques from many other Okinawan masters. It was the culmination of what O-Sensei (meaning "great teacher") learned from these masters of combat that would one day become what we now know as Shotokan karate.

Funakoshi-sensei is the man who first introduced Karate from the island of Okinawa to mainland Japan. In 1917 he was asked to perform his martial art at a physical education exhibition sponsored by the Ministry of Education. He was asked back again in 1922 for another demonstration. He was then asked back for a third time, but this was a special performance - he demonstrated his art for the emperor and the royal family! After this, Funakoshi-sensei decided to remain in Japan to teach and promote his beloved art.

Gichin Funakoshi passed away in 1957 at the age of 89. An ardent believer in the old matial adage "Bumbu Fuki" - the literary and martial arts are one - he also wrote several book on the subject of Karate, the first of which, "Rentan Goshin Karate Jutsu", being published in 1922. He later went on to write the now famous work "Karate-Do Kyohan" - known as "The Master Text". Fuankoshi was also a poet of some renown, and it is from his penname, Shoto, that our Karate style derives its name. He also wrote a fascinating autobiography, "Karate-Do: My Way of Life" which provides wonderful insights into his early life learning a secret martial art in the dead of night from two of history's great masters. These books and his art are a fitting legacy for this unassuming and gentle man and provide excellent inspiration for Karate students around the world to this day. 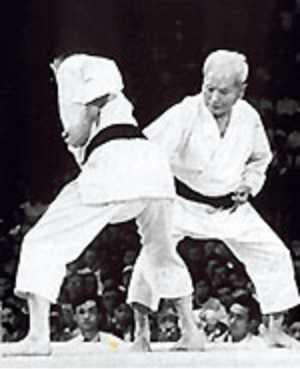 "Hall of the Warrior Spirit"